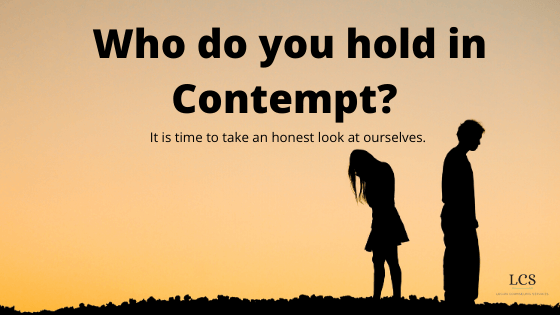 My mind has been swirling with thoughts and emotions trying to articulate the current problems we are seeing in our country. The distain for others that is so great in some that it allows room for violent action. But then it hit me.

As a therapist, one of my specialty areas is working with people who struggle with Co-dependency in relationships. This is often the case when addictions play a role but Co-dependent relationships can just as easily manifest on their own, without addiction present. One constant I find in these relationships is that one of the two partners tends to hold the other in CONTEMPT.

According to the Oxford English Dictionary, Contempt is the feeling that a person or a thing is beneath consideration, worthless, or deserving scorn. Meriam-Websters Dictionary states to hold contempt for someone can mean to feel distain or lack respect. For those who have studied the work of the Marriage/Relationship Researcher John Gottman, you would know that according to his research the biggest predictor of divorce is contempt in a marriage.

In a relationship this can look like: name calling –you idiot, what the h#!! is wrong with you, you are lucky I stay, you will never get anyone else. It can also present behaviorally by not consulting with them on major decisions that impact you both, treating them like a child, and being very controlling.

Ok but let’s take this a step further because contempt is not reserved just for romantic relationships. I could be wrong but I believe contempt is at the heart of many of the issues today.

If you hold someone in contempt due to their race, ethnicity, socio-economic status, gender, sexuality, job, etc. then it makes room, even just a little room, for you to ABUSE them.

It really does not take much, just a little spark of contempt to start the full-blown fire of contempt in your heart toward another human being. Once you think they are “beneath you” then you make space to treat them as such. Your moral compass can fly right out the window.

So, my question today is who do you hold in contempt? I think if we are honest it is a feeling many of us have experienced at one point or another. I don’t think things will change if we are not really honest with ourselves regarding the uncomfortable and challenging feelings and parts of ourselves we don’t like to admit exist. We cannot address something we refuse to acknowledge. And if we don’t address it, it will grow.

I honestly don’t know. But I would love to find out.

Kara is the owner of Logan Counseling Services, a private practice in Maryville, TN. She treats those who struggle with compulsive overeating, body shame, families of those struggling with addictions, video gaming addictions, and other compulsive disorders. Contact her at www.logancounselingservices.com

Posted in Relationships
← Frustrated with Social Media?Self-Acceptance →
Scroll To Top